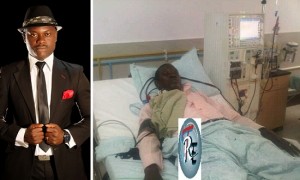 De Don isn’t one of the richest comedians in Nigeria but has the chance to give something worth much more than money to save his brother’s life.

The comedian De Don has agreed to donate one of his kidneys to his immediate elder brother, Morris, who has been diagnosed with Kidney failure.

Morris had previously traveled to India to have a transplant in 2009; the kidney was donated to him by his sister but he later couldn’t meet up with his check up in 2012 due to lack of money.

Unfortunately, Morris broke down again this year in January and De-Don has promised to donate one of his kidneys to him and here is what he said when asked about it.

“I have been doing shows here and there to raise funds because I am ashamed to beg. Now that the money is ready for the surgery, the only person who is both fit and willing to donate is myself, because several tests were carried before I was considered the chosen one. I consider the fact that this can happen to anybody. (…sobs) If God has placed me in the position to save my brother’s life then it’s a huge opportunity to enjoy God’s favour.

I thought this only happens to people who drink excessive alcohol and who smoke. But my brother neither smokes nor drinks alcohol. Come to think of it, you need only one kidney to live a lifetime, why not give the other to someone else to live again? It’s like having surplus food and watching people go hungry,”

We wish him all the best!!!