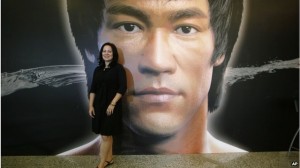 The world knows him as Bruce Lee, the cool and cocksure Chinese-American martial artist who unexpectedly burst into global cinematic consciousness in the early 1970s.

He starred in only five feature films as an adult, and only three of them were released before his early death in Hong Kong at the age of 32.

But fascination with his life, philosophy and legacy remains, crossing the barriers of age and nationality.

Starting on Saturday, Hong Kong will mark the 40th anniversary of Lee’s death by opening a five-year exhibition at the Heritage Museum celebrating the achievements of the city’s biggest star.

“I think that actually the reason we are still taking about Bruce Lee today, and not in a nostalgic way but in a relevant way, is because of the depth of his experience and his philosophy and the authenticity of his life,” said Shannon Lee, his only daughter.

“If he just performed well in a few action films, without all that underneath it, then I don’t think we would continue to be as relevant and inspiring today.”