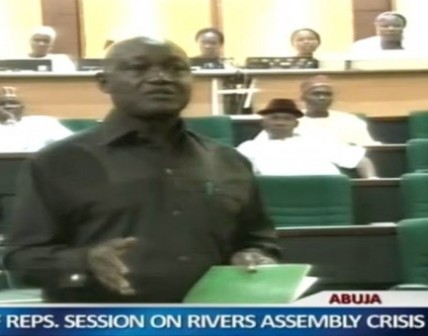 Following the violence that marred Tuesday’s session of the Rivers State House of Assembly, the House of Representatives on Wednesday, at a sitting chaired by Deputy Speaker of the House, Emeka Ihedioha, took over the functions of the Rivers Assembly.

The decision by the federal lawmakers to take over the functions of the Rivers Assembly, followed debates and approval of a motion and based on section 11, sub section 4 of the 1999 Constitution which states:

The House of Representatives also passed a motion directing the Inspector General of Police, Mohammed Abubakar to redeploy the Rivers State Commissioner of Police, Joseph Mbu for ‘dereliction of duties.’

It would be recalled that the Rivers Assembly engaged in a show of shame on Tuesday when five out of 32 members attempted to impeach the Speaker, Otelemaba Amachree.

The ensuing confusion led to an open display of aggression among the state lawmakers as they engaged in a fight which led to computers being damaged and the House leader, Lloyd Chidi, receiving treatment at the Government House clinic for injuries sustained.