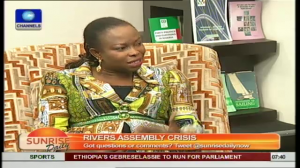 A member of the Rivers State House of Assembly, Mrs. Victoria Nyeche, has shed more light on the events that led to the outbreak of violence in the hallowed chambers of the House on Tuesday.

Speaking on Channels Television’s breakfast programme, Sunrise Daily, Mrs. Nyeche traced the origin of the recent events to 6th of May when armed touts disrupted the Assembly’s procession.

Accordiong to her, the initial disruption of proceedings was what led to the request for more security operatives at Tuesday’s sitting.

She said: “Because of this security situation we felt that for us to reconvene; we needed to be assured of our security. So we agreed and the Clerk wrote a letter to the state command that we needed additional policemen”.

Narrating how she watched the show of shame from her office via a Close Circuit Television (CCTV) monitor, the lawmaker said that the problem started when about seven members were exchanging pleasantries on the floor of the house and suddenly, Mr Evans Bipi showed up from nowhere and started dealing Mr Chidi Llyod, who is the House leader, blows.

She added that the Speaker, Amachree Otelemaba, who was trying to intervene in the matter, was also hit by Mr Bipi.

“Evans grabbed the tripod and started hitting Lloyd with it,” she recalled.

She said it was when most of the lawmakers ran away for safety, that a faction stayed behind to have a ‘sitting’ that led to the purported impeachment of Hon. Amachree as Speaker.

Consequently, “So even if 10 members sit down in the chambers, at best they can be said to be having a talk show” she said.