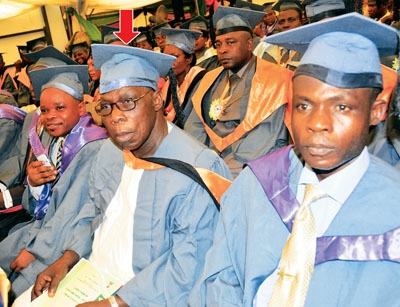 The Vice Chancellor of the National Open University of Nigeria (NOUN), Professor Vincent Ado Tenebe, on Monday gave a glimpse into former President Olusegun Obasanjo’s time as a student of the university, saying that he was very troublesome.

Prof. Tenebe, who commended Chief Obasanjo for giving a new lease of life to NOUN in 2002 during his administration as president, recalled that as a student, he (Obasanjo) used to call his lecturers at midnight on academic matters, but noted that at the end, he did very well to pass his courses in Christian Religious Theology.

The Vice Chancellor made this known during an interactive session organised by the Kaduna State Council of Nigeria Union of Journalists (NUJ).

According to him, “President Obasanjo, when he became a student which he did by example, resuscitated the university. A good history of the university was that this university came into existence by an act of the National Assembly during the reign of President Shehu Shagari in 1982, unfortunately before the university could establish itself, the Military regime that took over suspended the act and that was the reason the university was in dormancy until when civilian rule under Obasanjo came on board and re cooperated the university in 2002 while in 2003, we started our academic programmes.

“When Obasanjo became a student of the institution, he thought that it was an easy thing to do. When he was given all the courses, he realised it wasn’t easy and so he had to defer his admission. He said I would not take part in this until I finished my tenure as President and so he never studied while he was the President until he completed his tenure, then he started the course. He did a Post Graduate Diploma in Christian Theology. He was a very troublesome student because he will not start calling until 12 mid night and keep you online until about 2.00a.m.

“Every time he gives us trouble, we pray that he graduates of which he did and his certificate was valid. In the course of his study, Obasanjo said he wanted to sit among the students” and quoted the former president as saying, “I want to do the same thing others are doing.”

On if the examiners were not under any form of pressure while marking the former President’s script, Prof. Tenebe remarked:

“Obasanjo was a very brilliant student and I can tell you there were lots of controversies when his papers were being marked. I won’t disclose the secret of how our papers are marked but it is marked from Port Harcourt to Lagos, Kano, Maiduguri and the markers will never know whose paper they are marking. So the old man is intelligent, his certificate is valid and was done according rules and regulations of the Nigerian University Commission (NUC).”

On accreditation of courses in the university, NOUN VC said they had subjected 31 of their programmes to accreditation and had 30 of them, while the one that was denied accreditation was getting ready for the accreditation as NUC had gone through their book and certified that their Nursing programme was up to standard.

“On that note, they’ve allowed us to graduate students and students of nursing also participated in our convocation. They graduated and were given our certificate. So if anybody is holding the certificate of NOUN as a graduate of Nursing, any employer can confirm that from the NUC.

“Talking about school of Law, it is one of the youngest schools in NOUN and we are yet to graduate our students”, he said.

“Some of our students are now getting to the final year, and like I told you earlier we have gone through the NUC accreditation and they have passed us. Now we are preparing for the Legal Council and Education and we are going to do that in conjunction with the NUC. And that I will continue to say that our law students are equal to the task, they can compete with any law students from any university in the world not only Nigeria.”

“ I can assure you that by the time we will present our curriculum to the Legal Council and Education, I am confident that we are going to pass. As I speak to you there is what is called National Competition that all universities that have faculty of law compete every year. NOUN is currently the champion. I told you I have five VCs of other universities among my law students and an experienced Monarch,” he said.