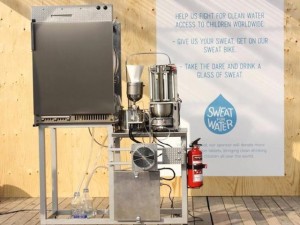 A machine that takes sweat-laden clothes and turns the moisture into drinking water is in use in Sweden.

The device spins and heats the material to remove the sweat, and then passes the vapour through a special membrane designed to only let water molecules get through.

Since its Monday launch, its creators say more than 1,000 people have “drunk other’s sweat” in Gothenburg. They add the liquid is cleaner than local tap water.

The device was built for the United Nation’s child-focused charity Unicef to promote a campaign highlighting the fact that 780 million people in the world lack access to clean water.

The machine was designed and built by engineer Andreas Hammar, known locally for his appearances on TV tech show.

He said the critical part of the sweat machine was a new water purification component developed by a company named HVR in collaboration with Sweden’s Royal Institute of Technology.

“It uses a technique called membrane distillation,” he told the BBC.

“We use a substance that’s a bit like Goretex that only lets steam through but keeps bacteria, salts, clothing fibres and other substances out.

“They have something similar on the [International] Space Station to treat astronaut’s urine – but our machine was cheaper to build.

“The amount of water it produces depends on how sweaty the person is – but one person’s T-shirt typically produces 10ml [0.3oz], roughly a mouthful.”

The kit has been put on show at the Gothia Cup – the world’s largest international youth football tournament.

Mattias Ronge, chief executive of Stockholm-based advertising agency Deportivo – which organised the stunt – said the machine had helped raise awareness for Unicef, but in reality had its limitations.

“People haven’t produced as much sweat as we hoped – right now the weather in Gothenburg is lousy,” he said.

“So we’ve installed exercise bikes alongside the machine and volunteers are cycling like crazy.

“Even so, the demand for sweat is greater than the supply. And the machine will never be mass produced – there are better solutions out there such as water purifying pills.”