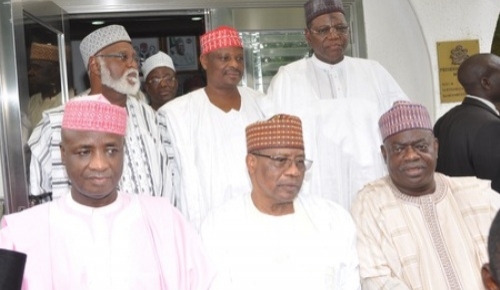 The five Peoples Democratic Party, PDP, governors of Adamawa, Sokoto, Jigawa, Niger and Sokoto currently embarking on consultation with former Heads of State and President, with the purpose of rescuing the party and polity from forces hell-bent on muzzling dissenting views, have threatened to help speed up the collapse of the party if their consultations do not result in success.

At the end of their latest round of consultations yesterday which took them to Minna, Niger State, four out of five of the governors – Babangida Aliyu (Niger), Aliyu Wamakko (Sokoto), Sule Lamido (Jigawa) and Rabiu Kwankwaso (Kano), met with Generals Ibrahim Babangida and Abdulsalami Abubakar, during which they relayed their fears and apprehensions on the polity.

Governor Murtala Nyako was the only that was absent at the consultation with Babangida and Abubakar because according to the other governors, he had a previously scheduled commitment with officials across the border in Cameroon.

Nyako, however, said yesterday that ongoing consultations by the governors were meant to help save the PDP from total destruction, but added that in the event of their failure to save it, they would help bury the party.

Speaking on their round of consultations with Obasanjo and other elder-statesmen, Nyako, who spoke through his Director of Press and Publications, Sajoh Ahmed said:

“We have held consultations with former head of state and former BoT chairman of the PDP, Chief Olusegun Obasanjo, on the need for him and other major stakeholders to save the party from dying.

“We are not stopping with Obasanjo as one of the most respected Nigerians of our time; we will proceed to the likes of Generals Ibrahim Babangida, Abdulsalami Abubakar and other eminent Nigerians just to mention but a few.

“We will continue to make our efforts to save the party. But if our efforts do not work, we have no alternative than to fold our arms, and see PDP die and help in burying it.”

The governor, who has been engaged in a running battle with the national chairman of the party, Alhaji Bamanga Tukur, warned that unless serious minded Nigerians intervene in time, the PDP would die a natural death.

He described the current trends playing out in the ruling party as worrisome, adding that the internal wrangling in the PDP could spell doom for the country’s democracy.

The Adamawa State governor, nonetheless, said he had approval for his supporters to join the All Nigeria Peoples Party, ANPP,  although he would still remain in the PDP.