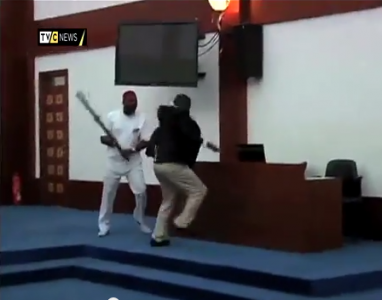 The Rivers State Police command has declared majority leader of the State House of Assembly, Hon. Chidi Lloyd, wanted over his role in the fracas that led to the injury of another lawmaker, Hon. Michael Chinda.

Information Nigeria learnt that the declaration follows Hon. Lloyd’s refusal to honour an invitation by the police in the state to explain his role in the fight that broke out in the state House of Assembly last week Tuesday.

In a statement issued by the state Police Public Relations Officer, Mrs. Angela Agabe, Hon. Lloyd, a pro-Amaechi lawmaker, is wanted for attempted murder and causing of grievous bodily harm to his colleague.

“Any member of the public, who knows his where about or any information about his where about is to contact the office of the state commissioner of police, Moscow road, Port Harcourt.”