Home National News Odd News MY STORY: I’ll Tell The Whole World What My Dad Did To...
Facebook
Twitter
WhatsApp

The trend among some fathers who choose to have sex with their daughters has reached an alarming state, with a new dimension introduced by a father who allegedly had carnal knowledge of his eight and half months pregnant daughter in Ibadan, the capital city of Oyo State, when she went to visit him after about 14 years of living apart. 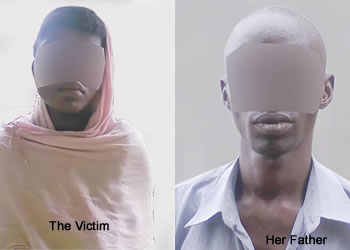 The girl, Ibukun, (not real name) who was impregnated by her lover in another state where she lived with her paternal grandmother was said to have been brought to Ibadan when she started having complications with her pregnancy. Her mother, who got separated from her father last December, took her in to keep an eye on her, but with her meagre income of N250 per day which she earns as a cook assistant in a local cafetaria, the woman seemed incapable of taking care of Ibukun and her two younger brothers who were staying with her.

When Ibukun saw that life in Ibadan did not suit her, she decided to go back to Osogbo. However, she had the urge to see her father whom she had not seen for 14years since her grandmother took her into custody. But her decision spelt peril for her as she allegedly ended up being raped by her father.

According to Ibukun, “I was defecating one day when I started bleeding.  I was taken to hospital where they saw my womb protruding from my cervix. The ultrasound scan I did showed that I had placenta previa. At another hospital, the womb was pushed in and I was warned not to have sex until delivery.

“I was brought to Ibadan but I was not comfortable. I told my mother that I wanted to go back to Osogbo but I thought of going to see my father whom I saw last when I was a child. I asked my younger to take me there, with the thought that I would at least get transport money from him.

“I went there on Saturday July 20 with the intention of sleeping over. My brother went to sleep and I also went to lie down. My father came and ordered me to remove my clothes, raining curses on me. He started robbing my breasts with his hands. He later took black soap, rubbed it on his hands and started using the hands to rub my breasts again.

“By then, I could see that he was aroused as his manhood had risen beneath the loin cloth he tied around his waist. It was after that that he had sex with me. I was weeping and my brother saw him and exclaimed ‘Ah! My brother also started crying. It was my brother who told my mother but I went to my aunt at Bodija area and narrated my experience to her.”

The father, Mr Kehinde Olasode however denied sleeping with his daughter, swearing with the Quran. He said that he only used some leaves recommended to him to bath his daughter because of the bleeding she was experiencing in pregnancy.

Olasode said: “She had been living with my mother in Osogbo since she was about five years of age. I have not seen her all these years.  About two months ago, I was called and informed that she was pregnant and bleeding. I called her mother to inform her and she brought her to Ibadan to stay with her mother at Apete. On Saturday, July 20, her brothers brought her to me, and I sat her down to castigate her for getting pregnant instead of being serious with education or a vocation.

“Meanwhile, someone told me to get Jatropha  (lapalapa) leaves with black soap with which she should bath, saying that the bleeding she was experiencing would stop. I used the soap to rub her head and her breasts and gave her water to rinse her body. I don’t know how they came about the story that I slept with her.”

The mother, Adijat, told Crime Reports that she left her husband in December to look for means of survival in Lagos because he was not responsible over the three children she bore him. “The burden was too much for me. He has another woman who bore him two children.

“My daughter got pregnant in Osogbo and she later started bleeding. We brought her to Ibadan and she stabilised. When I noticed that she was almost due, I agreed with her to go back to Osogbo because there is no single baby dress in Ibadan and I am financially incapacitated to buy them.

“She went to her father on July 20 and came back to tell me that her father rubbed and squeezed her breasts, vowing to expose him to the whole world. She also said that he slept with her but I don’t know how true that is.”

Crime Reports gathered that the case was reported at Mapo police station and the Divisional Police Officer, SP Ganiyu Ali ordered the arrest of the suspect.

Confirming the story, the Police Public Relations officer in Oyo State, Olabisi Okuwobi-Ilobanafor, said that the suspect would be transferred to the State Criminal Investigation Department (SCID), for further investigations. Crime Reports also gathered that nurses at the State Hospital, Yemetu could not conduct the test necessary to check for presence of spermatozoa in Ibukun’s vulva because of her bleeding state, so as not to trigger labour.