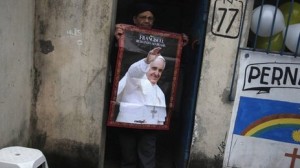 Pope Francis’s visit to Brazil will be cherished for ages to come as he continues warming himself up people’s hearts with his humility and love for the brethren.

The Argentine pontiff urged young Brazilians not to be discouraged in their fight against exploitation and appealed for greater social inclusion during a visit to a Rio shantytown.

Pope Francis was said to have requested a favela, or shanty town, be included in his schedule of visits.

On the fourth day of his visit to Brazil, Pope Francis was confronted with starkly contrasting images of life in the dramatic tropical metropolis.

To the obvious discomfort of his security detail, the Pope travelled to Rio’s northern slums in an open-sided vehicle, before walking the streets, glad-handing crowds and kissing proffered babies.

He then headed towards the opulence of its iconic beachfront area, where he was to be welcomed by hundreds of thousands of Catholic youths. 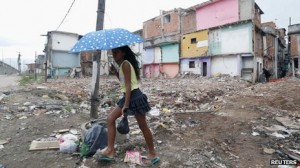 “Dear young friends, you have a particular sensitivity towards injustice, but you are often disappointed by facts that speak of corruption on the part of people who put their own interests before the common good,” he said.

“To you and to all, I repeat: never yield to discouragement, do not lose trust, do not allow your hope to be extinguished. Situations can change, people can change,” he told thousands gathered under pelting rain on a soccer field in the Varginha slum.

Brazil was rocked by huge street protests last month, when more than a million people took to the streets to condemn corruption, poor public services and the cost of hosting the 2014 World Cup.

The 1000-resident Varginha slum is one of a dozen favelas where police have evicted drug gangs and restored security ahead of next year’s World Cup and the 2016 Olympic Games.

The Pope was greeted to the worn-down slum with banners, flags and two two-metre statues representing the pontiff and the venerated Black Virgin of Aparecida.

He walked through the streets, stopping to chat with delighted residents and accepting a flower lei around his neck.

“This is going to change my life for the better,” said 59-year-old Carmen Mendoca shortly before the pontiff dropped in. “I am waiting for him with cake and coffee.”