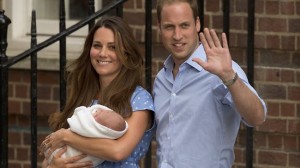 A Swiss businessman registered the name of Britain’s royal baby as a website address before it was even announced to the public.

Luc-Andre Biggs registered georgealexanderlouis.com on Wednesday morning, just hours before the announcement of the infant prince’s name, after consulting a list of possible combinations used by bookmakers in Britain, Swiss weekly Handelszeitung reported.

Biggs, 32, has made a living of guessing the addresses of websites that will become popular before selling them on to clients.

By registering the name of the Duke and Duchess of Cambridge’s son George Alexander Louis two days after his birth on July 22, the former estate agent adds another address to the 600 he already owns.

Biggs’s company, Key Domains, has made use of the same tactic for the past seven years from its base in Portugal.

George, a name shared by six English kings, was the clear favourite during the fevered speculation about the prince’s name, as it pays tribute to Queen Elizabeth II’s beloved father King George VI, who reigned from 1936 until his death in 1952.

No one is yet to buy Bigg’s website, but it’s only a matter of time before georgealexanderlouis.com will be sold…Biggs hopes it’s sold to the royal house.

James, Alexander, Richard and Louis were also frontrunners among those putting money on the prince’s name in Britain.