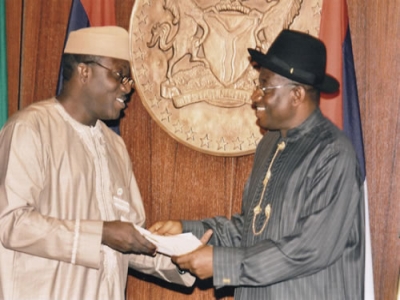 Governor Kayode Fayemi of Ekiti State in this parley with newsmen in Lagos recalls the events of Friday, May 24th where 35 governors gathered at the Rivers Governor’s lodge in Asokoro, Abuja, to elect a Chairman for the Nigeria Governors Forum (NGF).

Fayemi affirmed that there was an election which produced Governor Rotimi Amaechi of Rivers State as winner and appealed to President Goodluck Jonathan, as a former member of the Forum, to intervene in the lingering crisis.

You were at the NGF meeting which ended in controversy. What actually happened leading to the current crisis?

There’s no crisis in NGF.  But it is a very dangerous omen for 2015. Our colleagues who have found themselves defending this albatross round their necks should know that this will also come to haunt them. A lot of them have lost their credibility.

But they said there was no election…. (cuts in)

First, they said there was no election. When we came out with tape, Nigerians knew that there was an election, when the ballot was counted. They said the chairman did not vacate his seat. We had two hours of debate before the election. This is what most people are not aware of. Before we got to 35 votes being cast and counted, we have had three full hours of debate on consensus. We took a decision that Okaru is going to organize election and whoever wins becomes our chairman. Later they  said we should use the open ballot system by raising our hands, we said we are adults, we are not doing show of hands, we would vote because  secret ballot is what was recognized in the country’s Electoral Act. They agreed again. We moved to who should be the Returning officer and agent. They also agreed that the Director General should be the Returning Officer. On agent, both candidates agreed on one agent, he was there with the DG. We all sat, voted, we sat down quietly, the agent supervised this. They knew the truth that is why it saddens me because those who are against the result of the election are highly respected people. They came back and said there was no voting process.

Some of the governors said some of their colleagues betrayed them…

You have seen Niger Sate Governor’s comment, you have heard that of Kano, Jigawa, Adamawa and Sokoto State Governors’ comments on the issue. They have come out to say who voted where. Ours was clear because we voted en bloc. It was those who joined us that were not clear to Nigerians. And those who did it have come out to say they did it. Although there is still one person who voted for us whose is still masquerading as being on the other side. I’ll want you to figure that out with your own investigation because he wants to play on both sides. He wants to be seen to be in the good book of the other side but he is their worst enemy. He hates them with passion.

But is the President not supporting the Jang faction?

What is worrisome there is the reaction from the other side. We felt Mr. President is the president of all. Our president is not a candidate in the NGF election. He has no interest because he made that very clear to us that he has no interest in the NGF election and I don’t want him to be dragged into this NGF issue because it diminishes the presidency.

The occupant of that office should not be diminished. We must not do anything to diminish the office and the occupant. That is why some of us are vociferous in our own meeting. NGF meets only once in a month on the eve of the National Economic Council meeting. How should we shift our meeting because we want to make an impression? We won’t do that. The NEC meeting has been scheduled and the eve turned to be the day the President wanted to have dinner. We got to our meeting but while there, we said, the invitation to the dinner is a trap. We got to our meeting and we met technically. We didn’t meet to take any decision. We went to the dinner because it was our President that invited us and we must not do anything that would diminish us before Nigerians. But, we have been diminished before them because they don’t really make a difference between 19 and 16. They just say these governors can’t even hold simple election and they want Nigerians to come and vote in 2015. I think the President must find a way to exercise his moral authority on this matter. We must also find a way to meet the President in supporting him to exercise that moral authority because it wouldn’t augur well for us for some people to be hiding or creating the impression that they are the president’s men. We all are president’s men. We are the president’s governors. So, we are all his men. The president was once a governor, a member of the forum.

So which of the NGF is the real one?

The truth of the matter is that there is only one NGF that is running. Although someone claimed that he is the Sole Administrator of another NGF. Even the terminology is a problematic one. Are we still in the military era when we used to have sole administrators and other nomenclature? When we talk of programmes, NGF is still NGF. We still run programmes and all the 36 states still run programmes for NGF. The other NGF has no office. It has a place called office but there is no soul in that office. It has no programme. We have programmes that are jointly run with the World Bank, DFID, other institutions of state and the workers there are about 50. I think we need to do something. It is not about Amaechi. This is another problem I find disturbing. The issue is not Mr. President versus Governor Rotimi Amaechi. It has nothing to do for many of us in the governor’s forum don’t see it that way. For many of us, it has to do with integrity and independence of NGF. There is a danger in presenting two forums.