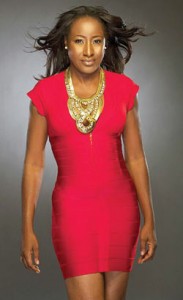 Iretiola Doyle, one of popular soap opera, Tinsel’s actress, in an interview talks about her marriage, career and of course, the premiere of her first movie.

According to her, her commitment to ‘Tinsel’ is on a first-call basis; which simply means that the production is considered above any other work commitments she may have. Professionalism, integrity and plain common sense dictate that I would not play a character similar to Sheila Ade-Williams in any other production.

When asked if she would quit acting, she replied “Quit acting? Not in this lifetime. I’m going to be acting until I am old and frail. And even after that, for as long as I have my faculties in good working condition, I will still be involved in communication in some way: writing, producing, radio show hosting etc.

Quit acting? Not in this lifetime.

She further said she’s a budding farmer. “I’ve always wanted to own something that was 100% mine, which could not be affected by someone else’s whims and caprices. I also strongly believe that in the years to come food and water will become a major deal. I started out with a tiny snail farm in my backyard. It was an experiment, to see if I could do it and if it was something I could sustain.”
Naij