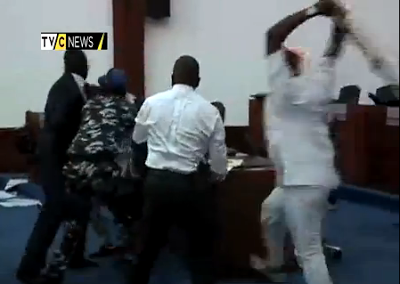 The Force headquarters in Abuja has begun a major clampdown on police officers close to Rivers State Governor Rotimi Amaechi and one of his major supporters in the state House of Assembly, Hon. Chidi Lloyd, as they have been invited to explain their roles in the political fracas in the state.

In a statement signed by the Force Public Relations Officer, Frank Mba, the police said in continuation of its investigation, it was summoning the “Rivers State House of Assembly, Hon. Chidi Lloyd, the Aide-De-Camp (ADC) to the Rivers State Governor, Ag. ASP Debeware-Semeikumo and the Chief Security Officer (CSO) to the Governor, Tony Iwelu to report to Force CID, Force Headquarters, Abuja.”

The statement reads in part, “It would be recalled that in the video clips, a man carrying a mace and another in Police Uniform as well as other security details were seen conducting themselves in a questionable and uncomplimentary manner. The invitation therefore seeks to obtain further details that will assist proper investigation into the matter.”

Meanwhile, the Inspector General of Police, Mohammed Abubakar, has reminded officers and men of the police force on legitimate assignments, particularly those attached to VIPs to always watch their conducts so as not to bring to ridicule the professional ethics, traditions and best practices of the Force.

The IG further warned of consequences for officers found acting in ways inconsistent with their duties saying they “will be severely dealt with in accordance with the laws of the land.”