A neo-Nazi Russian group has taken to social media to publicise images and videos of gay teenagers lured in on the promise of a date, before torturing them and forcing them to come out to friends and family on video. 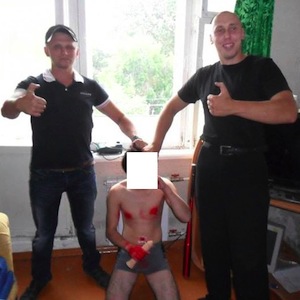 Gay victims aged 12-16 are reportedly lured in by the group Occupy-Pedofilyay, led by Maxim Martsinkevich, known under the nickname “Cleaver”.

Videos are then circulated of the victims being made to come out as gay, with a view to parents, schools, or friends finding out about their sexuality.

An uncensored image of one of the victims holding a sex toy, covered in red paint, and being held down, appeared on the Spectrum Human Rights Alliance blog.

The accompanying report also included a video of the torture of one victim who was sprayed with urine in public, however YouTube has now removed the video.

A report from May notes that 19-year-old Alex Bulygin, a victim of the ‘fighters with paedophiles’ branch of the group, committed suicide after having his sexuality revealed online.

It also quotes one member as having said: “If I had my way – I would kill them, but the state does not allow that.”

The group was established with the intention of revealing the identities of paedophiles, but after turning to adult gay men, it has now begun targeting young teenagers.

No police action has been taken against the incidents, despite numerous victims, and that over 500 similar groups have been formed across Russia using the VK social networking site.

The upper house of the Russian Parliament voted last month to approve both a bill banning adoption of Russian children by foreign same-sex couples and the nationwide anti-“propaganda” bill banning the promotion of “non-traditional” relationships to minors.

The bills, which have since been signed by President Vladimir Putin, ban foreign same-sex couples and unmarried individuals in countries where same-sex marriage is legal from adopting Russian children.