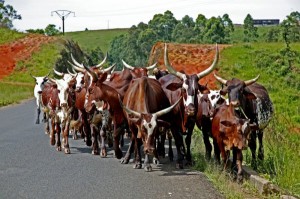 Men of the Katsina State Police Command, Wednesday, said they arrested a Nigerien, Bade Yusuf and five others, for allegedly stealing 96 cows in parts of the state.

Disclosing this at a press briefing in Katsina, Commissioner of Police, Alhaji Muhammad Hurdi said the suspects were apprehended by the police patrol teams in Kaita, Sabuwa, Faskari, Kafur and Safana Local Government Areas. He said the police had also recovered 96 cows in their possession.

Hurdi said the suspects were arrested following intelligence reports, adding that they made confessional statements that the animals were stolen.

The suspects had been charged to court to serve as deterrent to others, Hurdi said.

Hurdi, who said the police would continue to work with members of the public and with other security agents to rid the state of criminal elements, also disclosed the arrest of seven persons for alleged robbery on Sheme-Faskari and Kafur-Malumfashi roads.

According to him, six locally-made guns, a toy gun, two military-like caps, police-like beret, 11 mobile phones, three motorcycles, sticks and other dangerous weapons were recovered from them.

Hurdi also said the suspects had made confessional statement for the alleged crime.