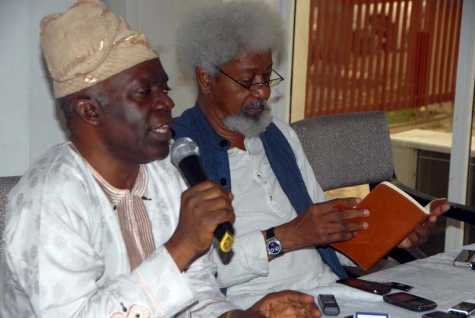 Nobel Laureate, Professor Wole Soyinka and human rights lawyer, Mr. Femi Falana (SAN), have been given a stern warning to steer clear of Port Harcourt, Rivers State, by a militant group, Ijaw Freedom Fighters (IFF), and a non-governmental organisation, Ijaw People’s Development Initiatives (IPDI), as their safety would not be guaranteed if they refuse to heed the warning.

Several civil rights groups have scheduled a global day of action rally for Tuesday in the garden city to draw attention of the international community to what they see as repeated assaults on democracy in the state by some anti-democratic elements.

However, reacting yesterday to the planned rally, IFF and IPDI said they cannot guarantee the safety of Soyinka, Falana and other non-Niger Deltans if they decide to participate in the protest.

The two groups described the role of the civil rights’ groups on the Rivers crisis as vexatious.

IFF leader, Sese Gideon, said his group “will not allow non-Niger Deltans to add insult in a matter that can be settled without bloodshed.”

In a statement titled ‘We will not take your coming to Rivers kindly’ Gideon said: “We are a group of youths along the creeks, waterways and uplands of the states in the Niger Delta region. We are committed to the protection of rights, privileges and freedom of the Niger Delta people.

“We met and observed with interest the continued frivolous and vexatious statements credited to perceived egg heads and civil activists like Wole Soyinka, Femi Falana and many others on the current crisis rocking the Rivers State House of Assembly.

“While we blame the political class in Rivers and Abuja for allowing such comments due to their indiscretion and show of shame, we will not allow non-Niger Deltans to add insult in a matter that can be settled without bloodshed. We have listened to the name-calling and tongue-lashing of the President and his wife by the civil society but what we will not take kindly to is the invasion being planned by the non-Niger Deltans in Rivers State.

“If the people of Rivers want to protest, they should protest and demand for what is right. But when it is shown, as clearly displayed, that it is targeted to ridicule and further discredit the South-South and its quest for Presidency in 2015, we cannot guarantee anyone’s safety again. We are not interested in who impeached whom (sic) but we will not fold our hands and allow the sponsored onslaught in the Niger Delta under the guise of civil society gathering.

“We cannot guarantee the safety of anyone interested and plotting to throw Rivers or any other Niger Delta States into turmoil”.

According to Ozobo, his group has met with over 50 civil society groups in Warri, Delta State and appealed to the people of Rivers State to shun the protest to avert further bloodshed.

“We urge the police and other security agencies in the state to endeavour to put off the protest to avoid rival group clash and stop planned further cause of disaffection in the state.

“The crisis in Rivers State is a minor issue that does not need external solution as warring leaders could resolve their differences if they mean well for Rivers.”

They warned that the interference of external forces would only add fire to the situation at hand and reiterated that “We are a body of civil activists in the six states of the Niger Delta and were never part of any planned protest in Rivers State.”