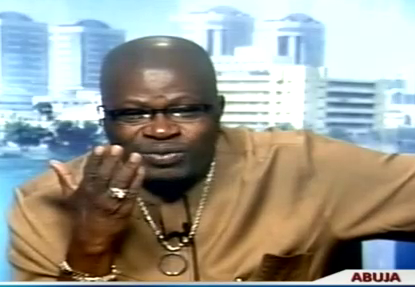 The craze by Nigerian governors to purchase private jets might not be unconnected with their sinister plots to use them as means of smuggling arms into the country without adequate inspection.

This was the bold assertion of the Director General, National Task force on Illegal Importation of Light Weapons and Small Arms, Osita Okereke, who spoke on Channels Television breakfast programme, Sunrise Daily.

According to him, “They (governors) take private jets abroad, purchase arms and land in their state –no security man has right to search or search him because it is a governor’s item. You cannot stop, you cannot search them.”

Mr Okereke made this allegation against the backdrop of the move by Zamfara State governor, Abdulaziz Yari, to arm vigilante groups in the state over growing insecurity concerns.

According to Mr Okereke, the revelation from Zamfara is just a tip of the iceberg and one that is public knowledge.

“There are so many of them in various states. These governors have brought in arms that are uncountable” he affirmed.

He further revealed that “we have marked so many states” but did not disclose the identities of such states because “it is a security matter.”

He traced the proliferation of arms to the inordinate ambition of politicians, who distribute them to hoodlums ahead of elections.

“There are millions of arms in Nigeria” Mr Okereke stressed adding that they (Governors) are already arming political thugs ahead of 2015 general elections.

He, therefore, appealed to government to provide the task force on Illegal Importation of Light Weapons and Small Arms, with Police, Army and budgeted funds because “we have informants all over the place and we need to pay them.”