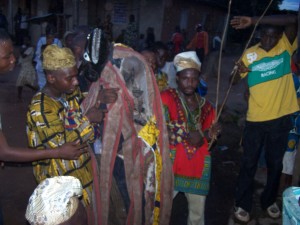 The threat by Oro cultists to begin their festival in day time contrary to the directive of the state government has heightened tension among residents of Ogere, Iperu, Ilishan, Ikenne, and Irolu towns in Remo North and Ikenne Local Government Areas of Ogun State.

It was learnt that the atmosphere in the towns is now tense following the insistence of the Oro cultists who have reportedly announced the commencement of the festival in different parts of Remo for three consecutive days.

The state government had last year in a letter entittled ‘Annual Oro traditional festival,’ signed by the Permanent Secretary of the Bureau of Cabinet and Special Services, Mrs. K.I. Akinwande given a directive banning such across the state to prevent clashes between traditionalists and Muslims.

In its response to a letter of request by the Ologere of Ogere, Oba Oladele Ogunbade dated July 9, 2013 on whether the Oro cultists should be allowed to hold their festival in day time, the government had said its decision to ban day time Oro festival last year remained intact.

“Please, be informed that at a recent meeting with the Commissioner of Police and Ogun State government, it has been resolved that on no account should any Oro festivals be held during the day again in Ogun State,” government said.

It was, however, gathered that Oba Ogunbade has communicated the decision of the state government to the Oro cultists, but they reportedly insisted on carrying out the festival being an annual event.

Sources say police may be called in to arrest erring traditionalists, but the matter is still being approached with caution.