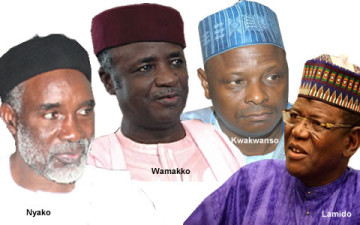 The governors, who commenced their meeting with the former President at about 11:45am, were led by the host governor, Aliyu Wammako. The other governors that attended the meeting were Engr. Rabi’u Musa Kwankwaso (Kano), Alhaji Sule Lamido (Jigawa) and Vice Admiral Murtala Nyako (Adamawa).

Niger State governor, Dr. Mu’azu Babangida Aliyu, it was learnt did not attend the meeting because he was already in Saudi Arabia for the lesser hajj.

The meeting which lasted for about one hour was held at the personal residence of Alhaji Shagari at Sama Road, Sokoto behind closed-doors.

At the end of the meeting, when journalists sought to know what was discussed, they did not go into specifics as two of them – Nyako and Lamido – said they came to seek fatherly advice on issues confronting the nation.

According to Lamido, “Just as we have visited other states in the recent past, the same thing brought us to Sokoto to fine tune ways and find solutions to the country’s multiple problems”.

Refusing to entertain questions bothering on politics, he continued, “you know Nigeria’s fundamental problem lies on security challenges which we are working round the clock to tackle so that it can be overcome.”