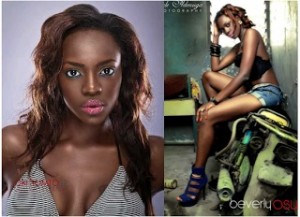 She is one of the two reps in the Big Brother house repping Nigeria, (The other, Melvin) but she is argubly the most controversial figure in the house.

With her heavily exaggerated stories and made up lies coupled with her flirting and sudden romance with South Africa’s Angelo, we take a look at her many exploits in the Big brother show and how it may affect her $300,000 Big Brother Chase ambitions as we near the  the finale of Africa’s biggest reality TV show.

Young, spontaneous and excessive are words Big Brother Africa fans relate easily to her. Her stories elicit taunts and laughter from Nigerian viewers. Many waive her off, preferring to call her ‘a disgrace to Nigeria’, without a second thought. But that is what Beverly Ada Osu has brought upon herself.

Her many lies and exaggerations
Beverly made ears twinge earlier when she revealed that she was expelled from secondary school. Then she spoke about a ‘thing’ with singer 2Shortz and tongues wagged more. The singer’s rebuttal of any links with her made people have a rethink. Could Beverly be making up her stories? Not long after many discerning fans began to pick holes in her stories. Funny enough, she told many of them to housemates without bothering if she was over-stepping boundaries of decency, tact, fact and truth.

“In Nigeria, I can be walking past a market, and a market woman will stone me,” Bev toldChasemates last week Friday. She claimed a 42-year-old man wanted to marry her after meeting her just for a day, just to buttress an earlier statement: “My mum used to tell me that the guy I will marry, I won’t date for long.”

While confirming that she dropped out of Babcock University, she raised viewers eyebrows with two blatant lies: “I went to the most expensive school in Nigeria. I was a first-class material before dropping out of school, not because I don’t have the brain.”

Many can easily attest to the fact that Igbinedion University’s fees dwarf that of Babcock and many a first-class student can spell difference without blinking.

If you still care you can read through these random sensational picks: “Flirting is in my genes,” she told Angelo. “I have over 16 Bibles,” she also told housemates. She claimed that popular singer Omawumi Megbele was her best friend.

Beverly found herself on the wrong side of a love triangle early in the game. Many gave her the benefit of doubt when Ugandan basketballer, Isaac ‘LK4’ Lugude decided to play a fast one on her and South African model Koketso Modibo. But many failed to take that as a hint.

She moved on to Ethiopian student, Bimp, after being shipped off to the Diamond House from the Ruby House. She didn’t need his permission to share his bed: She latched onto him like a leech for her daily survival. But Bimp’s avowed commitment to his girlfriend ensured that he kept the lines of friendship very clear.

When South Africa’s Angelo Collins connected with Beverly at the party zone, it was a case of two housemates finding love on the rebound; and that love which Beverly shares with the dance instructor has seen her throw caution to the winds.  After two near mishaps, Beverly finally let go last Friday in Biggie’s bathtub. She became the fourth female Chasemate to have séx on live TV, following closely in the footsteps of Betty, Selly and Cleo.

Her loose tongue
Beverly’s stories have no boundaries and respect. “My grandmother speaks Ibo and doesn’t speak English very well. She is an illiterate!” Her mother’s dealings in life are in the open. From revealing that her 52-year-old mother carried drugs, she claimed that she was also an alaiye (mother of street urchins), and spoke boldly of how her mother took one young  man to the cleaners with the help of her brothers. Hmmm…

She told Elikem on Monday: “My first boyfriend was Frank Okosa. He was 18 and in SS2, I was 15 in SS3. He was the first to have séx with me.” She went ahead to reel out a list of her many boyfriends after Okosa: CJ, Nosa (32yrs), Rukkie (35yrs), Special (32yrs) and Curtis (28yrs). To justify her many men, she gave a lame excuse: “All my ex were over-protective and they took me for granted.” If she had stopped there it would have been very unlike her. But she dropped another bombshell for Elikem, the listening ear: “I can’t make love except I am high.”

On Wednesday, Beverly still wanted to have a say, as long as any housemate made a comment. So, when Namibia’s Dillish Matthews disclosed that her mother’s birthday was August 14, Beverly jumped in, “my mum’s birthday is tomorrow.”

Beverly’s many tales coupled with her bathtub escapade with Angelo is not doing her any favours with the fans. But if she can avoid the possible eviction nomination list next week, she will be in the annals of Big Brother Africa history books as the only Chasematewho made the grand finale without being nominated for 11weeks.  If her name comes up next week, it would be safe to say even at this time that she may never make it to the finale, Nigerian or not!