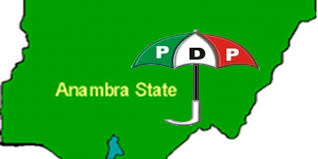 The Peoples Democratic Party (PDP) and the Independent National Electoral Commission (INEC) have been given a restraining order by a Federal High Court in Port Harcourt against accepting or recognizing the outcome of the governorship primaries election in Anambra State conducted by the Ken Emeakayi-led PDP that produced Tony Nwoye as its candidate.

Information Nigeria reports that Anambra PDP is split in two with one faction recognized by the national leadership of the party while the other is recognized by INEC. The division in the party reared its ugly head on Saturday when two parallel governorship primaries were conducted with two separate aspirants emerging as candidates.

But the trial Judge, Justice H.A Nganjiwa, ordered that the result of the Ejike Oguebego-led Executive backed by INEC where Senator Andy Uba emerged winner, should be accepted pending the hearing and determination of the suit before the court.

The order made by Justice Nganjiwa followed a suit instituted brought against the PDP and INEC by the Oguebego-led Executive.

In the ruling, with Suit No FHC/PH/CS/213/2013, the trial Judge ordered among others that “The 1st and 2nd Defendants are to forthwith comply with the order of this honourable court made on the 6thof August 2013”.

It would be recalled that sequel to Tuesday’s ruling, the court had in the interim gave an exparte order restraining both INEC and PDP from dealing with the Ken Emeakayi faction until the main application is heard.