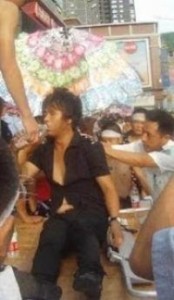 Onlookers were shocked when a man, who was said to be dead, suddenly got up and grabbed a bottle of water.
The soft drink vendor in China faked his own death in order to sue the government after an altercation with government employees.
But his cover was blown when he became too hot in the Hubei Province, in central China. The heat was too much for him to bear.

The incident occurred around 4:00 pm, when more than 10 men held the “corpse” on a gurney covered with a white sheet near the Jianghan Road subway station in the provincial capital of Wuhan.
The men protested and claimed that the government workers had beaten the vendor to death and they demanded tens of thousands of yuan in compensation.

More than 300 people gathered at the scene, and 80 police officers were sent to the scene to maintain order.

After two hours of protest, the “dead” man suddenly stood up, grabbed a bottle of water and drank it before saying: “It’s too hot. I cannot take it anymore.”
According to Human Rights Watch, many Chinese cities employ non-criminal law enforcement personnel called chengguan who work independently from police. Their job is to monitor citizens compliance with sanitation, traffic, and environmental laws.

The group is not very popular with the Chinese public after a series of high-profile violent incidents involving chengguan members. In the latest incident, six chengguan members were detained after a fruit seller in Hunan died after the group hit him on the head amid an altercation.

The “dead” man, whose surname is Han, along with two others have, been arrested for disorderly conduct. After being detained, Han told police that chengguan members clashed with vendors early in the day after claiming that their carts were blocking traffic. They told the vendors to leave before confiscating their mineral waters and other beverages.