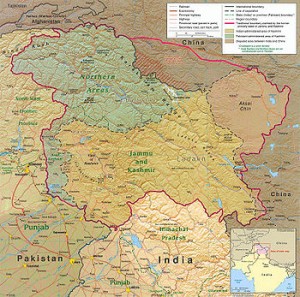 No fewer than five Indian soldiers have been killed in an attack along the disputed border of Indian-administered Kashmir, the Jammu and Kashmir state chief minister has said.

The Indian government initially said on Tuesday that the attack had been carried out by Pakistani troops, but Defence Minister AK Antony later said it was perpetrated by “20 heavily-armed terrorists, along with persons in Pakistani army uniform”.

Antony said that India had lodged “a strong protest” with the Pakistani government through diplomatic channels.

“Was briefed early this morning about news that 5 of our soldiers had been killed on the LOC. My heartfelt condolences to their next of kin,” Omar Abdullah, chief minister of Indian-administered Kashmir, said on the Twitter microblogging service, referring to the Line of Control dividing India and Pakistan in Kashmir.

Pakistan’s foreign ministry, however, dismissed the allegations as “baseless and unfounded” in a statement released later on Tuesday.

It said that Pakistan remain committed to the 2003 ceasefire in Kashmir. The Pakistani military denied that any exchange of fire had occurred.

The killings took place 200km south of the state capital, Srinagar, in the Poonch district of Indian-administered Kashmir.

Mohammad Fazal, a resident of the area, said that he had heard firing across the border early on Tuesday morning.

“Such firing along the border is damaging the region. People in the village are living in fear. Some people were sitting inside the mosque for prayers and the children inside the houses were shouting because they were scared as the firing was so loud,” he said.

“These incidents don’t help efforts to normalise or even improve relations with Pak[istan] & call in to question the Pak[istan] Govt’s recent overtures,” Chief Minister Abdullah said.

Abdullah was referring to a recent Pakistani proposal to restart stalled peace talks with India.

“This is an extremely unfortunate incident. If Pakistan wants to have better relations with India this is not the way,” Indian junior home minister RPN Singh said outside parliament in New Delhi.

The talks were called off in January following an attack on the border in which an Indian soldier was decapitated.

Pakistan vehemently denied that its forces had been involved in the January attack. The latest allegation from India comes days after the Pakistani military alleged that “unprovoked firing” by Indian forces in Kashmir had killed one Pakistani soldier.