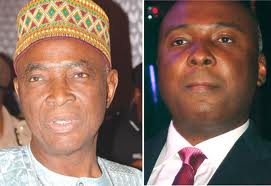 Pioneer Chairman of the Independent Corrupt Practices and other related offences Commission (ICPC), retired Justice Mustapha Akanbi, has denied that he was the Chairman at an event purportedly organized to dislodge the Saraki dynasty in Kwara politics.

The retired jurist, who reacted to a publication credited to him in Ilorin on Sunday at a news conference, said he “can never be a party to those who want to wrestle political power from Saraki dynasty in Kwara.”

He described the publication as a calculated attempt to tarnish his image in Kwara in particular and in the country in general.

While admitting attending, on invitation, the launching of a Non-Governmental Organisation (NGO) by the Tafida of IIorin, Amuda Aluko, Mr. Akanbi stated that he was not informed that it would be a political gathering.

He added that he hurriedly left the venue after his speech which was not political but on the establishment of the new NGO.

The former ICPC boss, who had been appointed the 2013 Amirul Hajj by the government of Kwara State, described the publication as a fabrication and work of enemies of progress.

He said he was in good terms with the Saraki family and could not champion any course to dislodge the famed Saraki dynasty from power in Kwara.

“The publication worried me that I was the chairman of an occasion to wrestle power from Saraki dynasty,” he said.

Mr. Akanbi, who disclosed that he had two Foundations in IIorin to uplift the standard of the downtrodden, said “one does not need to wear a political toga before rendering service to God.”

He said Mr. Saraki donated N5 million and a bus to the Foundation.

He advised Nigerians to think of how to complement government’s efforts at eradicating poverty instead of seeking political power for selfish interest.

Kwara politics has been in the firm grip of the Saraki dynasty for several years with former governor and incumbent Senator representing Kwara Central in the National Assembly, Bukola Saraki currently its head after the demise of his father, Olusola Saraki.