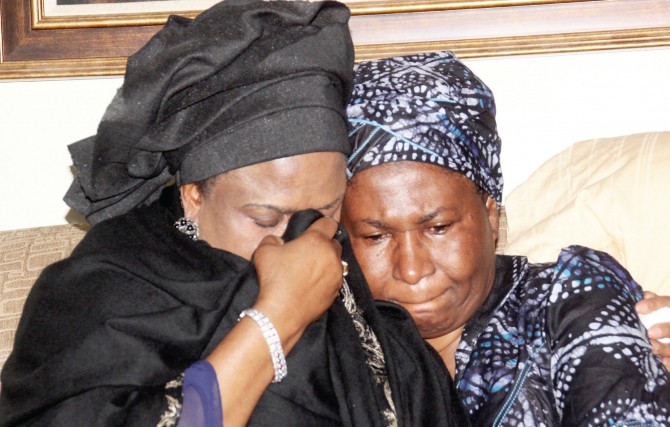 President Goodluck Jonathan’s wife, Patience Jonathan, has decried the failure of Governor Rotimi Chibuike Amaechi of Rivers State to pay her a condolence visit since her mother died in an automobile accident several weeks ago.

In a statement released today in Abuja, Mrs. Jonathan all but declared Mr. Amaechi and his wife guilty of bad manners for refusing to express their sympathy over her mother’s death.

The First Lady’s statement was a reaction to reports that she had failed to recognize the presence of Rivers State Deputy Governor, Tele Ikuru, who was at the Port Harcourt International Airport to receive her when she visited the state on Sunday.

In a statement signed by the First Lady’s Director of Information, Ms. Ayo Adesugba, Mrs. Jonathan stated that, despite the refusal of the governor and his wife to pay her a condolence visit, she bore them no grudge.

Mrs. Jonathan’s press release noted that numerous personalities, including former presidents, traditional rulers and diplomats, had consoled her over the death of her mother, Mrs. Charity Oba. “However, [Governor Amaechi] and the wife from the State which the First Lady hails have not paid such a visit,” the statement added. Mrs. Jonathan, who is originally from Rivers State, has been identified as the principal sponsor of a political group that has precipitated a political crisis in the state. In recent months, the state has come close several times to being ungovernable. The crisis culminated in a physical brawl between five members of the state assembly loyal to Mrs. Jonathan and the majority who back the governor. The brawl was captured on tape and went viral after different versions of it were posted on youtube.

Speaking recently with a group of pastors who paid her a visit, Mrs. Jonathan stated that Governor Amaechi was stubborn, but added that he was a son to her. She denied wishing the governor political or physical harm, adding that prayers were needed to resolve the crisis in the state.

OFFICE OF THE FIRST LADY, FEDERAL REPUBLIC OF NIGERIA

Leave Me Out of Rivers State Politics – First Lady The attention of the First Lady, Dame Patience Jonathan, has been drawn to reports carried in some sections of the media alleging that top officials of the Rivers government, including the Deputy Governor Tele Ikuru who came to receive the First Lady, were shielded from Dame Jonathan on her arrival at Port Harcourt International Airport yesterday, (18/08/2013). Some of the media reports went to the extent of alleging that Dame Jonathan “snubbed” the Deputy Governor.

It is important to set the record straight in order to prevent the public from being misled. The First Lady arrived in Rivers State yesterday for a private visit, to make arrangements for the burial of her late mother with members of her extended family.

It is instructive to note that since the death of Mrs. Charity Oba, the mother of the First Lady, several groups and individuals from across the country have come to condole the First Family at the State House, Abuja. They include Executive State Governors and their wives from all the political divides; Nigeria’s former Presidents and Heads of State and their wives, captains of industry, female Ambassadors and High Commissioners of Nigeria, other members of the diplomatic corps, royal fathers and traditional leaders – the list is too numerous to call. However, the Governor and the wife from the State which the First Lady hails have not paid such a visit.

The First Lady, like any Nigerian, is free to visit the state of her birth. Dame Jonathan bears no grudge towards anyone as she is an individual who continues to tirelessly advocate for peace and harmony in Nigeria. We therefore reiterate that the First Lady’s name be left out of the politics in the State.