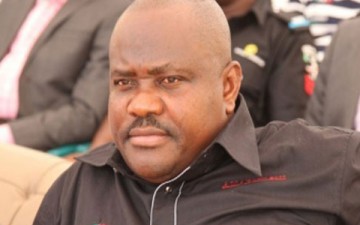 “The message is clear. This is a mass movement, because we want a change in Rivers State. I was a politician before I became a minister and I am still a politician. I cannot fold my arms and stay in Abuja and be doing ministerial work and somebody (Amaechi) is giving my boss conditions. I will not accept that”, he said.

He alleged that Amaechi, who is also the Chairman of the Nigeria Governors’ Forum (NGF), could no longer sleep as he (Wike) promised him, adding that the governor is restless.

Wike spoke yesterday at the Community Secondary School, Unyeada in Andoni Local Government Area of Rivers State. It was at the inauguration of the Local council and Wards (11) Executive Committees of the Grassroots Development Initiative (GDI), of which is the grand patron.

Last night, Rivers State Commissioner for Information and Communications, Mrs. Ibim Semenitari, dismissed Wike’s outburst; saying: “I do not feel it is statemanly for Wike to state that Rt. Hon. Chibuike Rotimi Amaechi, the Governor of Rivers State and the Chairman of the NGF, cannot sleep again.”

She added: “It shows people’s attitude to peace and security in Rivers state. It will be an unfortunate wish by anybody, for a state they call theirs, to give anybody sleepless night.”

Fully-armed soldiers and policemen provided security for Wike, who moved into and out of the ancient town in helicopter.