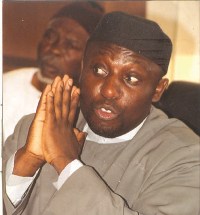 Imo State Governor, Owelle Anayo Rochas Okorocha, has said that his decision not to tolerate corruption in his government, has led to unprecedented level of development in the state just as he said corrupt leaders in Nigeria must be stopped as quickly as possible if the country must witness any development and economic growth.

The governor, who was addressing a Town Hall Meeting with Imo state indigenes, which was a side event of the ongoing Imo State Congress in Atlanta Georgia, USA, yesterday, said that corruption had become a parasite which he claimed had eaten the country’s economy to a stage of destruction; noting that “It is not too late to stop the leaders that are destroying the country with corruption”.

Citing his state as example, Gov. Okorocha said that with corrupt leaders in Nigeria, the country would not experience any progress just as he urged Nigerians to rise up in their anger and fight corruption to a standstill in order for the country to grow economically.

His words: “What is happening in Imo state now has never been recorded in the past twenty years and that was the result of my decision not to allow corruption in my government. I want you all to know that it was not my desire to be governor in Imo state but I had to come on a rescue mission when I saw failure instead of success.

“The level and the condition I met the state was very embarrassing to the extents that my colleagues did not want to spend nights anytime they visited me. I almost fainted the day Ohakim was handing over to me because everywhere looked very bad”.

The governor also spoke on the free education policy of his administration which he said had contributed to reducing the spate of crimes and prostitution in Imo State.

While putting the blame for the under-development of the state on past administrations, Okorocha attributed the success of his administration to the support and cooperation of the members of the State House of Assembly whose approval of his Four Years Budget Plan helped him to accomplish all the projects being embarked upon.

On his membership of the newly registered All Progressive Congress (APC), Gov. Okorocha, who was suspended weekend by the All Progressive Grand Alliance (APGA) for attempting to drag the party into the merger of opposition parties, said APC was the vehicle through which the aspirations of the South East could be attained just as he noted that all his actions are geared towards promoting the interests of Ndigbo in the present political dispensation.

Okorocha however urged the indigenes of Imo State who live in the Diaspora to come back home in order to join his administration to develop the state. He said: “Why should you, upon all your qualifications, come to America, pick up dirty jobs and still be insulted when there are better opportunities for you to team up with my administration if you know you have the potentials to help develop the state”.