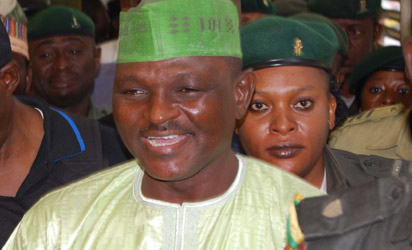 Northern leaders should be blamed for the incarceration of Major Hamza Al-Mustapha, a non-governmental organisation, (NGO), the Northern Youth Forum (NYF), has said.

NYF also stated that if not for President Goodluck Jonathan’s respect for rule of law, the former Chief Security Officer (CSO) to late Head of State, General Sani Abacha, would have still being held behind bars.

The group was reacting to Northern Elders Forum (NEF) leader, Professor AngoAbdullahi’s press conference which it described as a smear campaign against Mr. Jonathan ahead of 2015.

“It is evident that the President’s respect for the Rule of Law played a pivotal role in Al-Mustapha’s walk to freedom and everyone knows that if the President had wanted, he would have worked against Al-Mustapha’s freedom, just like his predecessors form the North did and it would have been difficult, if not impossible, for Al-Mustapha to walk the streets of Nigeria a free man today.”

In a press statement signed by its Northwest vice Chairman, Bello Abdulkadir and made available to newsmen, NYF picked holes with the stance by the elder statesman just as it slammed Prof. Abdullahi and one time Education Minister under the Abacha junta, Alhaji Dauda Birmah for laying claim to founding the NEF.

The Northern Youth Forum, said, “It is on record that the Northern Elders Forum was founded by late Dr Abdulrahaman Okene and at no time did the late elder statesman  hand it overto anyone.”

The Forum added that “Alhaji Birma, a former Minister of Education, has every   right to belong to or lead any group in Northern Nigeria based on  freedom of association as well as the right to declare support for any political ideology or candidate, but it does not make him or Ango the owners of Northern Elders Forum.”