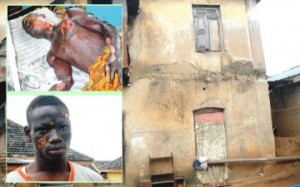 The victims are Adesanya, 20, Sulaiman Adebesin, 20, Saburi Seteolu 18, Raheem Bello 19, Azeez Alabi 20, and Kola Sodeinde 19.
It was gathered that the victims were allegedly set ablaze by Adebesin at 7pm because they were gambling and smoking Indian hemp on his premises.
A witness, who pleaded anonymity, said Adebesin, a commercial bus driver, had  just returned from an outing when he saw the six youths in his compound.
He said, “Their activities made the driver engage them in an argument. As the talks became heated, Adebesin reached for a can of petrol which he emptied on them.
“The victims attempted to flee when it dawned on them that the liquid poured on them was petrol.
“But  they caught fire from a stick of the Indian hemp being smoked by one of them. They suffered high degree burns due to the incident.”
Adebesin, who is currently being detained at Oke-Itoku Police Station, was said to have turned himself in to the police immediately after the incident .
Our correspondent gathered that other youths in the area, on learning of the development,  stormed Adebesin’s compound, and vandalised his apartment and injured his wife who is currently receiving treatment at an undisclosed hospital in Abeokuta.
The state Police Public Relations Officer, Muyiwa Adejobi, said that investigations had already commenced into the matter.
Adejobi, a Deputy Superintendent of Police, said, “Adebesin might be charged to court after the conclusion of investigations. He said four of the youths had been admitted at the General Hospital, Ijaiye, while two others were taken to a private clinic for treatment.
“Information available to us is that the suspect had an argument with the youths before he poured PMS on them. For now, we cannot ascertain other circumstances that led to the incident but we have the suspect in our custody.”
The police spokesman added that the command’s commissioner, Mr. Ikemefuna Okoye, also warned youths in the area not to engage in any reprisals, saying the police would not condone any act that could disrupt peace in the state.
AdvertisementClick Here To Join The 10,000 Naira Giveaway For 100 People!