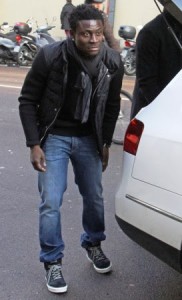 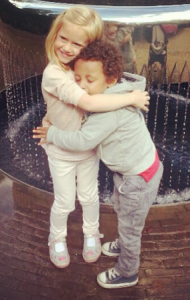 Out of favor Nigerian Super Eagle striker has shown that he isn’t only a goal scoring machine but also a baby making machine.

The above photo of the cute kid hugging a girl is a product of the soccer star who currently plays in the USA.

Tyler Martins is only three and a half years old but seems to show potential for attraction to the opposite sex.

Tyler is a product of Obagoal’s relationship with a white girl he dated while playing in the UK.

Martins has another child with an African lady he dated while playing in Italy.

That isn’t all. he is also expecting a third baby with Mario Balotelli’s older sister Abigail Barwuah.