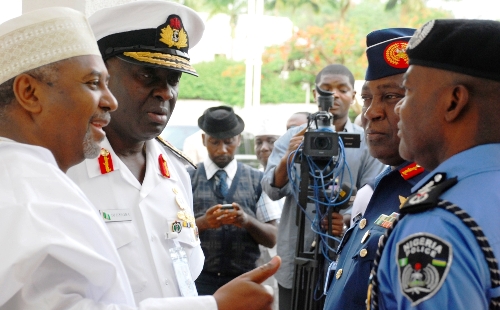 Security Chiefs were sighted on Monday at the Presidential Villa, Abuja, where they had a closed door meeting that lasted for about two hours with President Goodluck Jonathan.

The agenda was not disclosed as the Security Chiefs kept mum after the end of the meeting. There was no official statement also by the Presidency on the purpose of the meeting.

It was however gathered that the meeting might not be unconnected with the present security situation in the country.

Others are the Minister of State for Defence, Erelu Olusola bada, Minister of Police Affairs, Navy Captain Caleb Olubolade (rtd) and the Secretary to the Government of the Federation (SGF), Senator Anyim Pius Anyim.