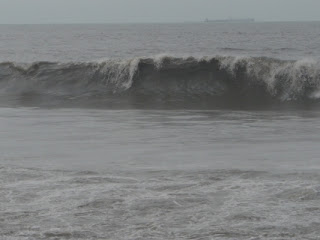 Residents of Lekki area of Lagos State yesterday experienced an ocean surge as the sea rose above its level and is currently threatening to take over the residential houses in the highbrow area.

Reacting to the incident which was widely rumoured to have led to flooding in the area, the Public Relations Officer, National Emergency Management Agency (NEMA), South-west zone, Mr. Ibrahim Farinloye, said only turbulence was experienced.

“Contrary to claims, there was no flooding in Lagos or Lekki and if they were, we would have been alerted; the only alert we received today was concerning an ocean surge,” he stated.

“Some environmentalists had contacted NEMA to alert us to warn members of the public not to swim in the ocean on any of the beaches due to the heavy turbulence of the water.

“Although the surge does not mean that they cannot visit the beach, they are urged to stay away from the water because ocean surges carry whatever is in its path.”

Mr. Farinloye added that the agency initially didn’t want to sound the alarm and cause panic in the process but rather chose to carry out a deeper analysis of the surge with the assistance of a group of experts drawn from different agencies.

On insinuations that the surge was caused by the mega Eko Atlantic City project, the NEMA zonal spokesperson said the possibility would be discussed at the stakeholders meeting with experts after which measures would be fashioned out to ameliorate the effect of the project on the ocean.