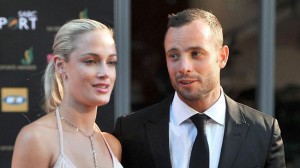 Paralympic star Oscar Pistorius will go on trial in March after being charged with murdering his girlfriend on Valentine’s Day, a South African magistrate ruled at a packed court hearing on Monday.

The 26-year-old double amputee wept and prayed with brother Carl and sister Aimee as he awaited the magistrate, who confirmed charges of murder, which carries a life sentence, and illegal possession of ammunition.

Reeva Steenkamp, a blonde cover girl and law graduate who would have turned 30 on Monday, died in the bathroom of Pistorius’s upmarket Pretoria home in the early hours of February 14.

She was shot in the head, elbow and hip.

The athlete known as “Blade Runner”, who is currently out on bail, has admitted to killing her but denied murder, saying he shot Steenkamp through a locked bathroom door because he believed she was an intruder.
Prosecutors will argue he is guilty of pre-meditated murder.

“The accused armed himself with his nine-millimetre pistol and through the locked door, fired four shots at the deceased. The deceased was wounded and died on the scene,” the charge sheet said.

“According to the indictment, it is intentional, it is planned, premeditated,” said prosecution spokesman Medupe Simasiku on Monday.

“It’s something that was planned in the mind, that ‘I’m going to take a gun, go to the bathroom and fire some shots’, whether it was an intruder or it was Reeva Steenkamp herself,” he told AFP.

“It doesn’t mean you plan for a year, or so many hours, you can plan for 30 seconds and do it.”
Magistrate Desmond Nair said the trial would start at the High Court on March 3 and run until March 20.

A senior judge will hear the case as South Africa does not have a jury system.

Monday’s hearing lasted only a few minutes, as lawyers had already agreed to start the trial next year due to backlogs in the South African courts.

Pistorius appeared in the dock wearing a black suit and light blue shirt, breathing heavily and occasionally wiping his nose.

“We are thankful that a trial date has been set and that we can now start preparing for the court case,” his uncle, Arnold Pistorius, said in a statement later.

Friends of Steenkamp were also present, dressed in black.

“Ironically, the 19th of August 2013 would have been Reeva’s 30th birthday, a day that should have been a celebration of her life,” their spokesman Ian Levitt said after the court adjourned.

“Instead it will now mark a court appearance related to her untimely passing six months ago,” he added as three of Steenkamp’s friends wept behind him.

Local media had said Pistorius may also be charged with gun offences as the state tries to cast him as aggressive and trigger-happy. However, no other charges were listed on the indictment. 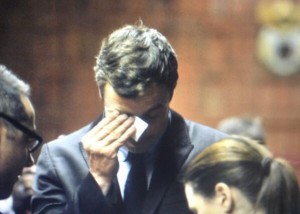 The document showed 107 witnesses, including many of Pistorius’s neighbours. “Some of the state witnesses heard a woman scream, followed by moments of silence, then heard gunshots and then more screaming,” it said.

Pistorius allegedly once fired a gun through the sunroof of Taylor’s car, and earlier this year reportedly discharged a gun by accident at a Johannesburg restaurant.

Ballistics reports from the bathroom door suggest Pistorius was on his stumps when the shooting took place, South Africa’s Sunday Times reported.
Prosecutors earlier said he donned his two prosthetic legs before firing four shots through the door, a delay they thought would prove the murder was planned.
Pistorius was released on bail of one million rand ($99,000) a week after killing Steenkamp.
The athlete, who earned his nickname for the fibreglass prostheses he uses in competition, was born without calf bones and had both legs amputated below the knee when he was 11 months old.