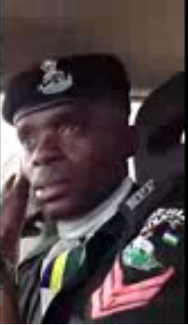 A policeman caught on tape demanding N25,000 bribe from a Nigerian suspected to have violated traffic rules in Lagos State, has been arrested and detained by the Nigeria Police Force in a rare display of prompt disciplinary measure.

This disclosure was made by the police in a Facebook post on Tuesday in response to the video which went viral as soon as it was uploaded on the internet and circulated in the social media.

The police said the errant officer is awaiting an “orderly room trial”.

The police also disclosed that the officer is a sergeant attached to the Lagos State Command Motor Traffic Division.

“The Inspector General of Police IGP MD Abubakar has directed the Commissioner of Police Lagos State to ensure that the orderly room trial is concluded in record time,” the post on Facebook said.