Home Politics Rivers Face-Off: ‘I’m Not Heating Up The Polity… But If They Don’t...
Facebook
Twitter
WhatsApp 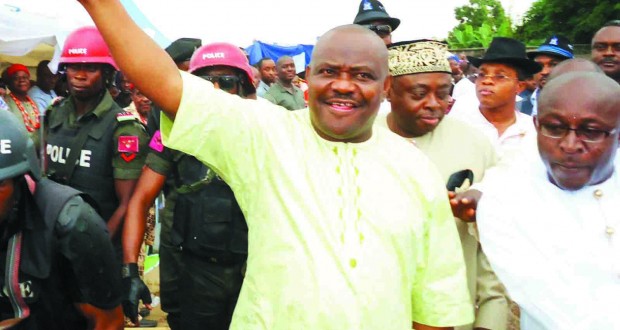 The Minister of State for Education, Barrister Nyesom Wike has given his condition for peace to return to Rivers State – that the suspended chairman and councillors of Obio/Akpor Local Government must be recalled.

The Minister, speaking yesterday in Port Harcourt after appearing before the Chief Felix Obuah-led Peoples Democratic Party (PDP) Performance Assessment Committee, also denied the widely reported statement attributed to him that he would make the state ungovernable for Governor Rotimi Amaechi.

Wike, was former Chief of Staff to Amaechi and Chairman of Obio/Akpor local government area.

Denying the allegation that he was making inflammatory statements, the Minister retorted, “What utterances have I made that are heating up the polity? I said those who want to destroy Obio/Akpor LGA, they will not sleep. If you want to destroy my house, will I allow you to sleep?

“Those who are accusing me of not doing my work, are they those who appointed me? Has Mr. President said I am not doing my work? I do my work. From Monday to Friday, I am in Abuja. Then Friday, I come back home to see my people. What is wrong with that?

“For me is that PDP must go from strength to strength. We do not want PDP to lose any election. Nobody will take us by surprise. I am doing my work. Mr. President knows that. There is nothing you will do that people will not criticise. If you are quiet, they will say why is he quiet? If you are not quiet, they will say why is he talking too much?”

Wike also debunked reports that he boasted he would be the one to lead the state’s delegation to this weekend’s special national convention of the party in Abuja in the absence of Governor Amaechi, who is currently on suspension.

“In my local government (Obio/Akpor), I know who the delegates are. I do not know the delegates from other LGAs. It is only the party chairman who can ascertain who are the delegates.

“Except those who are automatic delegates, like the governor, who is a member of the Board of Trustees (BOT), senators, House of Representatives members, party chairmen, assembly members. 27 (of 32 loyal to Amaechi) Rivers House of Assembly members have been suspended and will not be able to participate.

“Since they have been suspended from the party, they cannot take part in the activities of the party, until their suspension is lifted. It has nothing to do with me. Me leading the delegation is neither here nor there.”

“I do not know what you mean by force. Nothing can be enough. We are appealing to them (ASUU members). The Federal Government has done something. In the interest of our children and in the interest of our nation, they should go back to the classroom. Nothing like force. We cannot force anybody.”