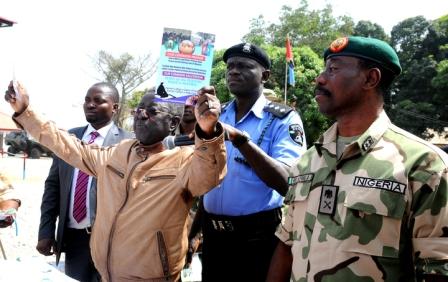 Rumours of an impending attack during the Eid-el-Fitr Sallah festival in Jos has been dispelled by the Special Task Force (STF) – Operation Safe Haven – in Plateau State.

A press release signed by the Media and Information Officer of STF, Captain Salisu Mustapha said: “The Special Task Force (Operation Safe Haven) would like to use this opportunity to dispel rumour of possible attack during the coming Sallah. Citizens of the Plateau should not panic and should go about their normal businesses. The STF is reassuring the general public on its commitment to ensure hitch-free Sallah celebrations in the state.”

The STF warned individuals or groups who are planning on fomenting trouble in the state to stay away or have themselves to blame as they would be regarded as enemies of peace and treated as such.

On issue of prayer grounds, the STF said, “The status quo regarding the contentious prayer grounds at Barkin Ladi, Rukuba road, Kwanan Soja and Dadin Kowa is to be maintained during coming Sallah prayers. Security personnel would be present at strategic places all over the State”.

The statement also announced a ban on the use of fireworks, knockouts/bangers and burning of tyres in the state during the festive period adding that security agencies would be deployed at recreation centres during the period.