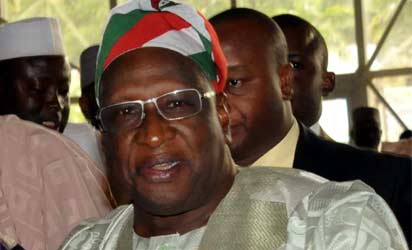 The national leadership of the Peoples Democratic Party (PDP) on Monday urged aggrieved party members to use the party’s internal resolution platform to redress their grievances.

The National Chairman of the party, Alhaji Bamanga Tukur, gave the advice in Abuja during a news conference.

He said as much as the party respected the constitutional rights of individuals to public opinion, movement and association, such exercise should be done with some element of civility.

This, he said, should be done in accordance with the norms of the society and the party’s constitution and guidelines.

The PDP national chairman said his commitment to the ideals of the party’s founding fathers was total and unwavering.

He promised to take the party to greater heights and to ensure that it captured most states that it lost to the opposition.

“I will continue to run the party with all sense of humility, commitment and ideals of our party.

“I will also ensure that peace, unity and love exist among party faithful,” Tukur said.

He said the party leadership was doing everything possible to ensure that aggrieved party members were reconciled so that they could reap the benefits of working together.

He said the party was working hard to ensure its victory in the forthcoming Anambra governorship election slated for Nov. 26.

“Our commitment to Anambra is to work hard and put in place a PDP administration that will deliver democracy dividends to the people of the state,” Tukur said.

On the leadership crisis rocking its Anambra chapter, Tukur said the duty of INEC was to supervise and not to recognise anybody.

According to him, all hands are on deck to ensure that the issue is resolved before the polls.