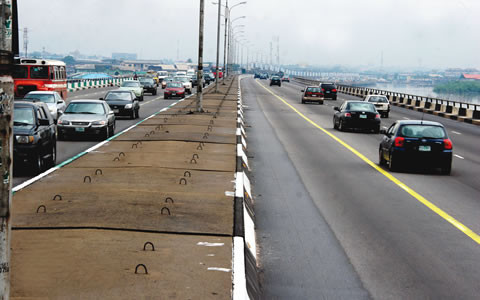 The Federal Executive Council (FEC) on Wednesday approved a contract of N290.745 million for a comprehensive underwater inspection of the Third Mainland Bridge in Lagos.

The Minister of Information, Mr Labaran Maku, disclosed this while briefing State House correspondents on the outcome of the council’s meeting presided over by President Goodluck Jonathan.

Maku said that the approval was sequel to a memorandum presented to the council by the Minister of Works, Mr Mike Onolememen.

“The bridge is a vital artery on the federal highways network connecting Lagos mainland to the island.

“Following reports of oscillation and excessive vibrations of the bridge under traffic load, investigations and tests were carried out by experts on the bridge in 2008.

“And the reports indicated that the bridge was structurally sound but required the replacement of damaged expansion joints and bearings.

“The minister of works tabled a memorandum to seek approval for the comprehensive underwater inspection, assessment of pilings, river bed bathymetric survey, profiling and echo metric test on Third Mainland Bridge,” he said.

Maku said the check would save the bridge from extensive deteriorating condition.

He noted that the longest bridge in the country which was crucial to the traffic and economic activities in Lagos needed the comprehensive inspection for safety of lives.

The minister said that the contract was awarded in favour of Messrs ICECON (Nig.) Ltd. with completion period of two months

The News Agency of Nigeria (NAN) reports that the 11.8 kilometres third mainland bridge, constructed in two sections, was completed in 1990.