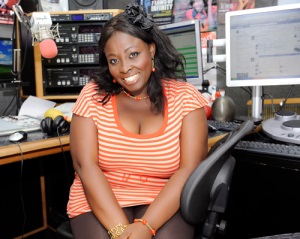 Plus-sized, mother of four kids and Wazobia FM presenter, Omotunde Adebowale, popularly known as, Lolo 1 according to the information dropping on our news desk, may have joined the league celebrities with failed marriages.

According to what the insider rate said, Lolo got tired of running the family from her personal purse, which she has allegedly been doing for several years. According to what we heard, her now estranged husband Adebowale had refused to work to earn a living and thus support the family, but depends on his wife’s fat salary, while he lies at home all day.

When www.myemag.net put a call through to Lolo on Wednesday, August 8, 2013 at exactly 5:15 pm, she said, “Who told you that? I have not spoken to the press about my marriage, so how did you get the story?” When we asked if we could quote her on her words, she said, “I don’t know, but my marriage is not having any issues”. And she hung up.

While we stand firm to say that we are not happy she ‘s in this current situation, but we also do not expect her to own up, since it’s a trend among celebrities never to tell their fans the truth of any matter until it spills out uncontrollably like a wide smoke.

In another report Lolo said;

”I have four kids,please the people spreading this rumour should not scatter my marriage.my husband is out of Lagos for work and he wont be happy hearing anything of such.marriages have challenges alright but mine is okay.I don’t want to even fuel this rumour because i don’t want my husband to be upset but you can take it to the bank that i am still very married.
i don’t really like publicity when it concerns my family so i keep them away from the press,its about me ,not about them.My pastor will soon call me now to ask what is going on.”…LOL