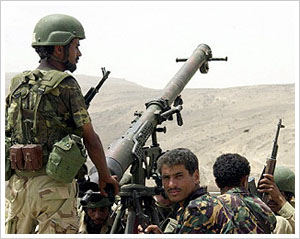 A plot by alleged al-Qaeda operatives to take over oil and gas export facilities and a provincial capital in the eastern part of Yemen has been foiled by the country’s security operatives, a government official has said.

Rajeh Badi, a press adviser to Yemeni Prime Minister Mohammed Salem Basindwa, said the plan involved dozens of al-Qaeda members dressed in Yemeni army uniforms storming the facilities on the 27th night of Ramadan, which was on Sunday.

“The plot aimed to seize the al-Dabbah oil export terminal in Hadramout [province] and the Belhaf gas export facility, as well as the city of Mukalla,” Badi told the Reuters news agency, referring to the Hadramout provincial capital.

He said the plot was prevented by deploying extra troops around the targeted facilities and banning anyone from entering.

It was not immediately clear if the alleged plot was linked to threats which prompted the US to close diplomatic missions across the region and withdraw many of its personnel from Yemen.

Also on Wednesday, a US drone strike killed at least six people in southern Yemen, the fifth in less than two weeks.

Witnesses and local officials in the province of Shabwah said the drone fired at least six missiles at two vehicles in a remote area about 70km north of the provincial capital, Ataq. Both vehicles were destroyed.

Residents who rushed to the scene found only charred bodies, they said.

At least 20 people have been killed in drone strikes since July 28, when a strike killed at least four members of Ansar al-Sharia, a local armed group affiliated with al-Qaeda in the Arabian Peninsula (AQAP), one of the most active branches of the network founded by Osama bin Laden.

US sources have said that intercepted communication between bin Laden’s successor as al-Qaeda leader, Ayman al-Zawahri, and the Yemen-based wing was one part of the intelligence behind the alert last week that prompted the closure of the embassies.

The United Kingdom, France and Germany have also closed their missions, and other European countries have taken extra precautions. Belgium, Italy and The Netherlands advised their citizens to leave.