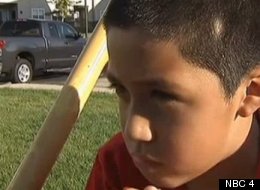 An 8-year-old in Maryland says he used karate to escape from a vicious murder attempt.

Jacob Soliz-Amaya was in bed at around 8 a.m. Saturday when his father’s ex-girlfriend, 26-year-old Helen Marie Newsome, allegedly attacked the boy, first covering his head with a pillow, then beating him in the head with a dumbbell.

“I woke up and she was smothering me,” Soliz-Amaya told NBC Washington.

Authorities say Newsome hid in the home for more than 12 hours waiting for the boy’s father to go to work before she went after the child.

The 60-pound boy demonstrated some of those moves — seen in the video above — for NBC Washington.

Newsome then escaped by jumping out the window, cops say, but they caught up to her soon afterwards and charged her with first-degree attempted murder.

The boy — now with eight staples in his head — has been released from the hospital.

He told WJLA that Newsome “tried to hurt me because she knows my father loves me more than anything else.”