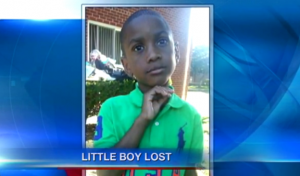 Sending your child off to his first day of kindergarten is nerve-racking for any parent, but to have them go missing that same day is simply a nightmare. Unfortunately, Valencia Bates of Blasdell, NY., a town outside of Buffalo, experienced just that on Tuesday when her 5 year-old son Jon Anderson was dropped off nearly 10 miles away from his home in a completely different town.

After finishing his first day of school at Central Charter in Buffalo, Anderson was supposed to be dropped off at his home in Blasdell, however the young boy was instead left outside of an apartment complex in Cheektowaga — several miles away from home — with no parent or adult in sight.

Anderson walked aimlessly around the apartment complex until a Good Samaritan spotted the boy looking lost and crying. The woman soon called the police and Anderson was eventually reunited with his mother two hours later.

The West Seneca School District is responsible for Anderson’s transportation to and from school, and have acknowledged that the driver went against school policy. “We have a practice in transportation where for kindergarten children, they are not to be let off the bus unless a parent’s there. So that protocol was not followed,” said the Superintendent Dr. Mark Crawford. Crawford claims the bus driver was under the impression Anderson was another little boy who was absent on Tuesday, but shared the same first name as Anderson.

The boy’s mother Valencia Bates, who works as a bus driver, is rightfully outraged with the school district and cannot understand why anyone would leave a child unattended. ”My baby sat on the curb and and cried. When he saw me, when I came out of the police station I told him ‘I love you so much.’ I was lost,” she said. “Anyone could have gotten Jon. Anybody not in their right mind could have got my baby.”

The superintendent would not say whether or not the bus driver would be fired, referring to it as an “internal matter.” What a nightmare. Our hearts truly go out to Valencia Bates and her little boy. We’re glad he was able to walk away unharmed.