Home Metro News Call For Resignation: I Work With President Jonathan, I Will Just Do...
Facebook
Twitter
WhatsApp 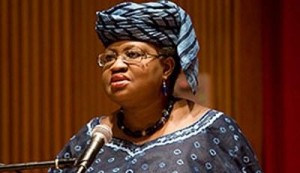 Following calls by 7 governors who are opposed to the Alh. Bamanga Tukur-led People’s Democratic party, PDP, for the resignation of the Coordinating Minister for the Economy and Minister of Finance, Dr. Ngozi Okonjo-Iweala, the Minister has said that she was not contemplating resignation and would concentrate on her job of managing the nation’s economy for the common good of Nigerians.

Making her stand known at a briefing in Abuja, where she discussed the state of the country’s economy, Dr. Okonjo-Iweala said there was no way in the world she would resign. “That doesn’t arise. I am not here for those kind of issues. I am Minister of Finance for the country. I am working with President Goodluck Ebele Jonathan and I will just do my job.

“This (briefing) is not to address that kind of issue. All of you are Finance correspondents and I call you from time to time I have this kind of press conference and I share with you what is happening in the economy. That is what I am doing. So aim not answering to that and as you see me here do I look any close to resignation? I ‘de kampe’”.

“So don’t worry about. We should stop talking about political issues here. The economy should be managed for the good of Nigerians. That is why we are here. Let’s face facts of the economy. I have given you facts about the economy. I have given you roads built; agric jobs created increase in production, you can go and check for yourself so that we can focus on facts,” she said.