Fancy Dresser Wears a Different Costume Every Day for a Year 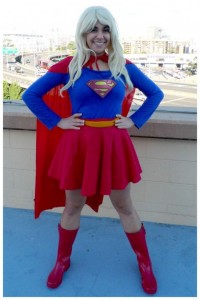 Mary Saba, a young Australian woman whose favorite hobby is creating funny costumes, challenged herself to wear a different one every day for a whole year. Since most of her costume were homemade, Mary only needed $440 to reach her goal.

Even before she started her original project, Mary’s friends called her “costume queen” for the time and passion she put into every one of her wacky outfits. She had always enjoyed creating funny attires and having people walk up to her just to say how cool they think she looks. “Most people have regular hobbies – reading, writing, dancing, playing sports – but I always received most enjoyment from creating a really funny costume,” Mary writes on her Theme-Me blog, where she documented her personal challenge.

The idea to create and wear 365 different costumes came to her around Christmas, in 2011, when she decided to dress in a series of green and red outfits every day during the last week of work, as a way of getting into the festive spirit of the Holidays. One day, she overheard some of her colleagues discussing which ones of her costumes they liked most, and that’s when she realized just how much her dressing habit entertained those around her. Mary then thought of The Uniform Project, where a girl pledged to style a black dress differently everyday for 365 days as an exercise in sustainable fashion, and it all just came together in her head.

She decided kicking off the funny costume challenge on the day she turned 26 would be a really special way to celebrate her birthday, so on June 28, 2012 she wore her first outfit, that of Little Red Riding Hood, which happens to be one of her favorite childhood stories. She photographed herself wearing a different funny costume every day after that, until June 27, 2013 when she celebrated her completed challenge by organizing a costume party. She traveled on public transportation and went to work dressed as an Ooompa Loompa, the Little Mermaid, Kylie Minogue , Xena – Warrior Princess, King Kong or Marilyn Monroe, among many others, and while she did get some funny stares from people along the way, Mary says she loved every second of it.

Seeing her dressed as a different character every day or an entire year, many people asked Mary about the financial cost of her challenge. They were surprised to learn that all the 365 costumes combined cost the young Australian just $440. That’s because she made all of them herself using the many outfits and props in her wardrobe, as well as cardboard, plastic and stuff she picked off from the local charity shop every weekend. She planned all her costumes in advance, by searching for special occasions for that day, celebrity birthdays or by taking suggestions from users of her blog. After completing her year-long project, Mary celebrated by organizing a costume party with her friends and family.