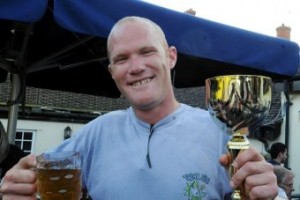 A British man has eaten 49 garlic cloves to take out first prize in the first annual World Garlic Eating Competition.

Oliver Farmer won the inaugural contest, run by a garlic farm in the south-west English county of Dorset, where competitors had to eat as many pre-peeled cloves as possible in five minutes.

“The garlic keeps coming back – it gets stronger and stronger,” he told local website Inside Dorset.

He took home $173 in prize money for his efforts.

Event organiser Mark Botwright told the BBC: “It was absolutely fantastic and an unbelievable result.”

Runner-up Ali Harvey, from Seatown, who managed to eat 46 cloves, was quoted by the BBC as saying: “(I’m) in pain. It’s really a lot spicier than you’d think.

“I thought I was going to be sick at the end.

“I’m full of garlic now but it was cracking fun.”

A total of 26 people took part in the competition, with the rules stating that cloves had to be eaten one at a time but could be washed down with liquid.

The world record is currently held by Deepak Sharma Bajagain, who ate 34 cloves in just one minute in Nepal in 2009.