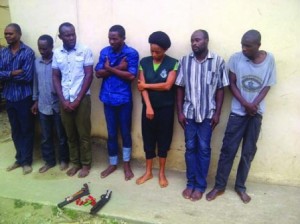 Chioma, while speaking with PM News said she arranged for the guns with Raymond Chukwuka, a.k.a. Stubborn, they were to use for the operation, which she claimed was a land matter, whereas the police said that their mission was allegedly to rob a male customer of the hotel, who sells fertilizer, of about N8 million.

Other suspected members of the gang are: Amadi Igwe, 41, Raymond Chukwuka, 24, Ignatius Okeredi, 27, Michael Madu, 52, and Okechukwu Jerome, 28, and a yet-to-be identified member who is at large.

The alleged robbery operation, according to the police, was foiled by some staff of the hotel, who promptly made a distress call to SARS operatives.

The law enforcement agents were said to have surrounded the hotel, and later searched all its occupants. It was in the process that two locally made guns and 12 live ammunition were recovered from the robbery suspects.

“We received a distress call from a staff of Bolatito Hotel, who said they suspected some people around the hotel. The Special Anti-Robbery Squad moved in, surrounded the place and demanded to search everybody. It was in the process that two guns and 12 live ammunition were recovered in Chioma’s car. This led to the arrest of all her gang members,” a top police source told P.M.NEWS.

Following their arrest and conclusion of investigation, the police took them to court.

Chioma, 35, who claimed to be a Law graduate from the University of Lagos, was remanded in prison custody along with six other members of her gang by Magistrate A.O. Komolafe of the Magistrates’ Court, Ikeja.

They are facing a three count charge of robbery, conspiracy and unlawful possession of firearms.
Chioma claimed that she graduated from UNILAG in 1999, was called to the bar in 2000, and owns a Non-Governmental Organisation, Youth of All Nations Empowerment Association. But authorities of the University of Lagos said she did not graduate from that institution.

An officer of the school, who craved anonymity, said Chioma cannot claim to be an alumnus of the university if she cannot provide her matriculation number.

“The fact that she claimed to have gone to Law School with the first batch is not substantial enough. UNILAG usually sends graduating students at a stretch, not in batches. My position on the issue is that she did not graduate from UNILAG, and so she was not our student,” the officer said.

Chioma’s claim of being called to the Bar was also debunked by Barrister Tunji Busari of Cognate Solicitors, who explained that “we have a directory for all lawyers. We have all their names with the year they were called to bar, with their NBA registration numbers. When I checked through her name in the directory, I could not find her name in my record book.”

When our reporter called Mr. J.E. Joshua, the chairman of Youth of All Nations Empowerment Association, he denied that Chioma is the founder of the association.

“She just participated in a charity work which the association embarked on in April, and promised to participate fully in other projects of the NGO. But we decided to stop working with her when we realised that she wasn’t a straight forward person. She is not working with us,” Joshua stated. [PMNEWS]