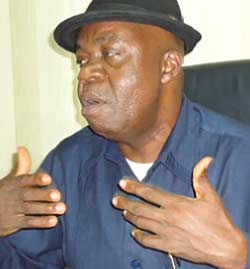 The Anambra Commissioner for Special Duties, Mr Vincent Ezenwajiaku, said he refused to honour the invitation of the Special Fraud Unit (SFU) of Nigeria Police for fear of being tortured.

Ezenwajiaku was accused of defrauding a company, Bio Plastic Manufacturing Ltd of N10 million by the owner, Mr Chuks Mgbemena.

The SFU of Nigerian Police in Lagos declared him wanted on Sept.18 for refusing to honour its invitation.

The ex commissioner told newsmen in Awka on Monday that the fraud unit and the complainant, Mgbemena, were not after the money owed them.

“They want to arrest, detain and torture me and if possible maim me for life as a way of humiliating me,” he alleged.

He reiterated that there was no truth in the report that he defrauded Mgbemena using an non-existing company.

The commissioner said Mgbemena ran the necessary checks on the company and found it to be duly registered before making the payment of a total sum of N8.2 million.

“The amount was for the acquisition of 34 per cent share in the company which he paid within three years.

“The allegation against me that I duped him with an inexistent company is not true.

“It is sheer fabrication and falsehood. The company is duly registered with the Corporate Affairs Commission with registration number RC 278625 by a law firm A.C. Ezenduka and Co. in 1995.

“The certificate of incorporation is there and the law firm is still in existence till date.

“We ran two bank accounts; Equity Bank and Diamond Bank, and you know that there is no way you can open a corporate account without your company being incorporated.

“The company, Bio Plastic Manufacturing Limited, while it existed was also a member of Manufacturers Association of Nigeria (MAN).

“I had mandated him to choose someone to be his eye in the company and he chose his elder brother Mr Mike Mgbemena who then became the General Manager and received salaries.

“How can he claim that I duped him with an inexistent company when it was he who came to me and begged me to purchase shares in my company,” Ezenwajiaku asked.

The commissioner said that he had instituted a libel suit against the SFU and Mgbemena demanding for N250million for alleged defamation of his character.

He thanked Gov. Peter Obi of Anambra for seeing the matter as a deliberate act to tarnish his reputation, maintaining that the matter was politically motivated.

“It is a case of hatred. How can they declare me wanted when they know how to get to me?

“They are out to arrest, detain and torture me; that was why I went to court,’’ he said.

Ezenwajiaku, had, however, maintained that he only owed N6.5 million.

It would be recalled that Ezenwajiaku was appointed commissioner in June 2012. [NAN]