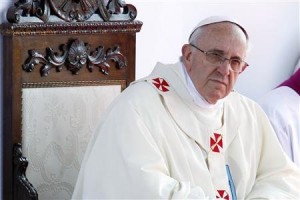 Pope Francis brought laughter to a crowd of young people on Sunday when he told them he was not “Tarzan” but gets his staying power during times of difficulty from his faith.

Speaking off the cuff at the end of a trip to Sardinia, he said he had recently marked the 60th anniversary of the day he first felt the vocation to be a priest.

“I have not regretted it. And it’s not because I feel like Tarzan and have the (physical) strength to go ahead,” he said, prompting of laughter and applause for comparing himself to the fictional character raised by apes in the jungles of Africa.