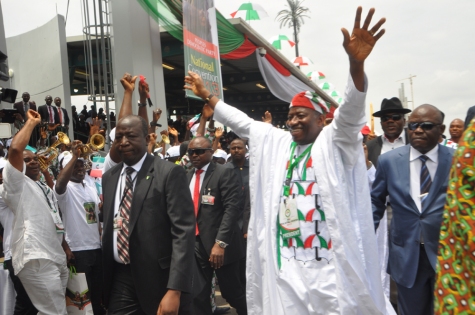 Former Vice-Chancellor of Ahmadu Bello University, Zaria and scribe of Northern Elders Forum (NEF), Prof. Ango Abdullahi has urged Nigerians not to give President Goodluck Jonathan his much desired second term by rejecting him at the polls come 2015 should he declare his ambition to contest.

Prof. Abdullahi hinged his call on what he described as the president’s betrayal of the process that brought him into office.

Speaking as Guest of the Week on Liberty Radio, Kaduna, yesterday, the former Presidential Adviser on Food Security during the Olusegun Obasanjo administration said President Jonathan got the support of the North to contest for one term in 2011 but is now reneging by eyeing re-election in 2015.

While admitting that he would want power to return to the North in 2015, Prof. Abdullahi said he would not mind supporting the candidature of a South-Southerner like Prof. Tam David-West.

Like Ijaw leader, Chief Edwin Clark, who blamed former President Obasanjo for the political crisis in the ruling Peoples Democratic Party, PDP, Prof. Abdullahi also blamed his former boss for tampering with the PDP zonal arrangement adding that Mr. Jonathan’s position on zoning is a fallout of the Obasanjo legacy.

He said “when Obasanjo wanted an extension of tenure for a second term under the zoning arrangement, he had to come to an extended caucus of the PDP. I remember how people opposed the idea. The late Abubakar Rimi was one of them and he was supported by about three others that Obasanjo should not be given an extension and that the Presidency should come to the north for four years before going back to the South.

“Eventually, about 37 people out of the about 41 present voted for the extension for Obasanjo to have a second term. Now coming to why we should not trust people who renege on promises. Obasanjo was the first to deny that there was a zoning that brought him to power. He did that and kept doing it and it is most likely it was from him that they learnt what they are doing because he was instrumental to Jonathan becoming Vice President.

“So, Jonathan must be Obasanjo’s student on matters of zoning because he himself kept saying, when we were arguing that Jonathan rightly became the President of the country when Yar’Adua died, ‘This is what the constitution allows’ and in fact insisted on it and nobody begrudged that.”

According to Abdullahi, “The President’s foot soldiers have approached me. I met one of the foot soldiers and I told him that for me, there wouldn’t have been any reason to support any candidate from outside the north. The north is not selfish and has never exhibited any selfishness.”

He faulted the president’s transformation agenda saying, “I don’t know what indices they are using and can’t see what direction this transformation is going. The indicators are very clear that virtually everything is collapsing.”